Happy Spring! Enjoy our seasonal and holiday music specials. Support the programming you love by making a donation today.
Webcasts

James Jordan hosts Sounds Choral this Sunday (11/15) with a "sneak hear" of the new CD by The Same Stream choir, "The Fire of Love & Songs of Innocence," featuring music by Patrick Hawes. Tune in at 2 pm. 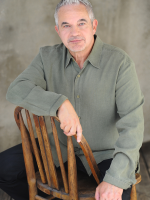 James Jordan
Grammy™-nominated conductor James Jordan, Artistic Director and Conductor of The Same Stream is recognized and praised throughout the musical world as one of America’s pre-eminent conductors, recording artist, writer, music psychologist and innovators in choral music. He was described as a “visionary” by The Choral Journal, which cited his book Evoking Sound as a “must read.” His more than 45 books explore both the philosophical and spiritual basis of musicianship, as well as aspects of choral rehearsal teaching and learning and are considered to be essential books in the conducting profession. His book Evoking Sound has been praised by the Choral Journal as a “must read.” At Westminster Choir College he is professor and senior conductor, and he conducts Westminster Schola Cantorum and the critically acclaimed Westminster Williamson Voices. He is also director of the Westminster Conducting Institute and co-director of the Choral Institute at Oxford.
See stories by James Jordan