Happy Spring! Enjoy our seasonal and holiday music specials. Support the programming you love by making a donation today.
Webcasts
Early Music
Everything about Music from the Middle Ages, Renaissance and Baroque

Host Gabriel Crouch presents "Choral Epitaphs," works written by composers to honor their mentors after their death. Enjoy this program this Sunday (4/18) at 2 pm. 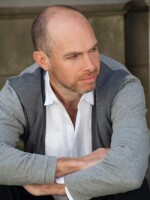 Gabriel Crouch
Gabriel Crouch is Director of Choral Activities and Senior Lecturer in Music at Princeton University. He began his musical career as an eight-year-old in the choir of Westminster Abbey, where he performed a solo at the wedding of HRH Prince Andrew and Miss Sarah Ferguson. After completing a choral scholarship at Trinity College, Cambridge, he was offered a place in the renowned a cappella group The King's Singers in 1996. In the next eight years he made a dozen recordings on the BMG label (including a grammy nomination), and gave more than 900 performances in almost every major concert venue in the world.
See stories by Gabriel Crouch