Happy Spring! Enjoy our seasonal and holiday music specials. Support the programming you love by making a donation today.
Webcasts

Host Ethan Sperry presents selections from the recording of Benedict Sheehan's Liturgy of Saint John Chrysostom, performed by the Saint Tikhon Choir, on Sounds Choral this Sunday (8/8) at 2 pm. 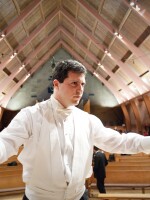 Ethan Sperry
Hailed by The Oregonian for providing “the finest choral concerts in Portland in recent memory,” Ethan Sperry is Director of Choral Activities at Portland State University, where he conducts the world-renowned Chamber Choir and leads undergraduate and graduate programs in conducting. He is also the Artistic Director and Conductor of the Oregon Repertory Singers, one of the America’s most distinguished adult choruses. Choirs under his direction have performed at over a dozen ACDA and NAfME Conferences, won over thirty awards and medals at international choir competitions on four continents, and sung at The Hollywood Bowl, The Kennedy Center, and the United Nations. Under his direction in 2013 The Portland State Chamber Choir became the first American Choir ever to win the Grand Prix at the Seghizzi International Choral Contest in Italy, and in 2017 they became the first American choir to win the Grand Prix at the Bali International Choral Festival, the largest choral gathering in Asia.
See stories by Ethan Sperry